punk rock became big in the 1970s and had its own unique style it fit its rebellious sound and culture.
materials such as leather, rubber, metal studs, chains, were all very popular among punks.
Vivienne Westwood and Malcolm McLaren were famous for opening
their boutique called 'sex' that sold the punk rock style.
with the punk rock style it was a lot to do with creating the image yourself rather than buying it of the high street. Therefore punk would create tattered hems of their t-shirts and cut hole in it jeans jackets and tops, they would add spikes and safety pin to their outfits. they were also known for painting disturbing images or word onto their clothes.
with punk the colour palette didn't vary much, punk been seen in either all black, black and white or maybe just a splash of colour such as red.


with progressive rock it was all about glam therefore fabrics worn by prog musicians would often be glittery, shiny, bright/bold and portray a fantasy feel. prog rock was all about colour and pattern with in fabrics and making a statement. prog took historical as well as fantasy and super natural ideas and added that in to its fashion ideas. 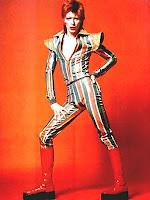